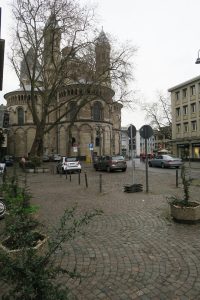 The city of Cologne in Germany is an open air museum with twelve Romanesque churches. Although these treasures were severely damaged in the Second World War, they embellish the archbishopric as never before  after decades of restauration and rebuilding. Twelve (late) Romanesque churches and their Gothic updates surround the Cathedral of Cologne. The cathedral did arise from ashes as well.

Cologne was a powerful archbishopric in the eleventh and twelfth centuries.  The beginning of the second millennium inaugurated a period of two centuries of great expansion of the Latin-speaking Church and bishoprics (and mighty abbeys) played a decisive role in this development. The Church assumed to maintain order and to provide spiritual comfort and security to society. The crusades in the Middle East and the Christianisation of eastern Europe  gave a military legitimation to the Church as warriors of God. The capture of Jerusalem in 1099 and the Kingdom of Jerusalem were  great propaganda successes, although disastrous from a military perspective in the centuries to come.

Society was deeply religious and the Church became the savior of mankind, guaranteeing eternal life in paradise, provided the Church had been (financially) supported by those longing for a place in heaven. The Church became an institution of power, in close cooperation with secular rulers. The political apogee was achieved during the papacies of Leo IX (1049-1054), Gregory VII (1073-1084) and in particular Innocent III (1198-1216). The Church became a European institution, with a single language (Latin), unitary legal system (ecclesiastical law), standing bureaucracy and strict hierarchy. The secular patronage and aristocratic networks supported this culture of expansion and power.

The appointment of bishops became politically motivated and served the interests of the rulers and architecture, churches and religious art symbolised this situation. The investiture struggle between Pope and secular rulers symbolises this quest for power. Cologne and  twelve Romanesque churches represent the power and prestige of this archbishopric. The twelve churches are (in German) St. Andreas, St. Aposteln, St. Cäcilien, St. Georg, St. Gereon, St. Kunibert, St. Maria im Kapitol, St. Maria Lyskirchen, Groß St. Martin, St. Pantaleon, St. Severin and St. Ursula, each with their own architects, patrons and commissioners, but all sharing the same spirit of self-representation, power and dominant role of the Church, the (new) class of wealthy citizens and aristocracy.

They are touristic destinations and works of art nowadays, like the splendid Schnütgen museum in St. Cäcilien shows, but their original meaning was as serious as military fortifications or palaces of kings and aristocrats. (Source: V. Sekules, Medieval Art , Oxford 2001).

Although the Romans claimed to be conservative, it was their open mind to other cultures that seems to have empowered their ability to conquer. In this view, Roman imperialism was not only political and military in nature, but also cultural in the sense that they used conquered cultures to shape their own culture and identity. … END_OF_DOCUMENT_TOKEN_TO_BE_REPLACED

European monarchies do rather well for outdated institutes. The Grand Duke of Luxemburg Henry I of Luxemburg (1955) is the most recent proof of the pudding. In his Christmas speech of 2012 he referred to a further limitation of grand-ducal power and the necessity of modernization of the constitution. The power of the Grand-Duke is already rather restricted, but … END_OF_DOCUMENT_TOKEN_TO_BE_REPLACED