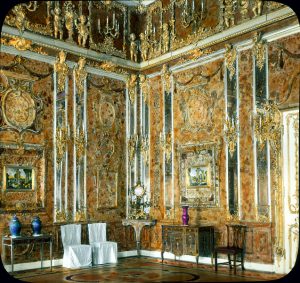 Amber can be found at around 200 locations in the world, in Europe mainly in  Denmark, the Baltic States, Switzerland, Austria, Spain, France, Rumania, Slovakia and Italy (Sicily). Amber is a beautiful material and easily worked. The earliest piece on which the head of a wild horse is engraved dates from around 10 000 BC. The Greeks and other peoples around the Mediterranean knew and highly appreciated amber. The Greeks called it electron. The preciously worked stones were used around  in rich graves on the Peloponnesus (1600 BC), they were imported from the Baltic region and northern Europe, Amber was one of the most imported goods and long distance trading networks existed already, and are not an creation of the EU.

The (provincial) elites of the Roman Empire also showed huge interest in amber. The European rivers were important arteries of communication and down them amber was brought from northern Europe to southern Europe. The most important centre for amber trading arose at the outlet of the Adriatic sea especially in the town of Aquileia. An industry arose there and amber products, such as jewellery and other decorative items, but also sculptures, jars, vases, knife handles and very small amber figures in the form of animals, fruit, parts of the body, often bearing short inscriptions, were widely distributed in the Roman Empire and beyond. Amber never ceased to be a wanted stone afterwards, although towards the end of the second century AD supplies of amber to southern Europe were drastically reduced and the industry in Aquileia gradually dwindled away. It was not until centuries later that amber should make its comeback.

Amber reappears in the Viking Era in Denmark around the ninth and tenth centuries as excavations at the trading centres of Hedeby and Ribe ( Germany respectively Denmark) show. Gaming pieces, dice, jewellery, spindle whorls and small sculptured figures emerged. Several workshops have been discovered by archaeological finds. The demand must have been significant. Amber remained the stone of the powerful and splendid romanesque works of art.

It became possible to make large panels of amber by using a wooden framework covered with sheets of amber. The most magnificent example was the Amber Room. The wall panels were commissioned by Frederic I of Prussia and were realized in 1711 and were used in the Berlin Castle. The panels were given to Peter the Great by Frederik William I in 1713 and set up in the Winter Palace in St. Petersburg. The Amber Room moved to the Summer Palace and summer residence of the Tsar and enlarged with even richer amber decorations. The Amber Room was moved as booty to Köningsberg (Kaliningrad) by the Germans in 1941. One of the greatest works of amber art simply vanished in 1945 however. (Source: M. Ploug (Ed.), Amber (Copenhagen, Danish Amber Museum 1998).

Although the Romans claimed to be conservative, it was their open mind to other cultures that seems to have empowered their ability to conquer. In this view, Roman imperialism was not only political and military in nature, but also cultural in the sense that they used conquered cultures to shape their own culture and identity. … END_OF_DOCUMENT_TOKEN_TO_BE_REPLACED

European monarchies do rather well for outdated institutes. The Grand Duke of Luxemburg Henry I of Luxemburg (1955) is the most recent proof of the pudding. In his Christmas speech of 2012 he referred to a further limitation of grand-ducal power and the necessity of modernization of the constitution. The power of the Grand-Duke is already rather restricted, but … END_OF_DOCUMENT_TOKEN_TO_BE_REPLACED