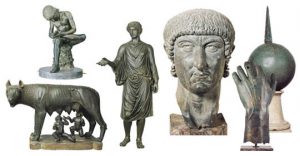 The Age of the conquest from the time of formation of the Roman Empire, when Rome gradually expanded its control throughout the Mediterranean basin, from Spain to the coasts of Asia Minor, saw the formation of a purely Roman figurative language, which capitalizes on the whole culture of Greek artists, which in time is received, absorbed and modified. This is the period in which the ruling elite felt strengthening of its prestige by art. Rome between the third and first century BC becomes the only hegemonic power over the entire Mediterranean basin. At the conclusion of the victorious military campaigns, large amount of money and the rich spoils of war brought about a change of taste that turned into cultural revolution. The works of Greek art exhibited during the triumphal procession of generals were of a quality never admired before, sometimes even in precious materials hitherto unknown in the city. The exhibition in the Musei Capitolini in Rome presents terracotta friezes and pediments of temples, home furnishings such as chandeliers, tables, craters, precious vessels and statues.