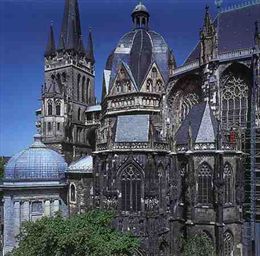 The Cathedral of Aachen’s present appearance has evolved over twelve hundred years of history. The Cathedral is open to visitors. One can see the Carolingian bronze doorr from about 800, the Pine coins from about 1000, the Lotharingen Madonna with child, about 1400, the octagon Carolingian core building, about 800, Our Lady of Aachen, fourteenth century, the main altar adorned with a golden alter piece, about 1020, the golden ambo, the so-called Pulpit of Emperor Henry II (Heinrich II), before 1014, the Shrine of St. Mary, about 1220, the Eagle’s stand, fifteenth century, the memorial slab for emperor Otto III, from1834, the radiant Madonna, 1524, the shrine of Charlemagne, twelfth century, and his marble throne. For nearly 600 years, from 936-1531, German kings were enthroned here. The beautiful articfacts and architectural brillance even miraculously survived warfare of the twentieth century.

Although the Romans claimed to be conservative, it was their open mind to other cultures that seems to have empowered their ability to conquer. In this view, Roman imperialism was not only political and military in nature, but also cultural in the sense that they used conquered cultures to shape their own culture and identity. … END_OF_DOCUMENT_TOKEN_TO_BE_REPLACED

A thousand years ago, Europe as we know it today did not exist. Thirty million people living between the Ural and the British isles, between Scandinavia and Greece had no reason to think of themselves as a single culture or people. The Roman empire had left only half of the continent with roads, theaters, Latin, … END_OF_DOCUMENT_TOKEN_TO_BE_REPLACED