The Oriental Legacy of Napoleon 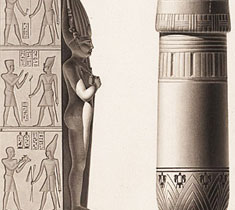 The Wallraf Munseum in Cologne exhibits the drawings of Jean-Baptiste Jean-Baptiste Lepère (1761-1844), a treasure that has rested almost in hiding for 200 years. The presentation will be flanked by modern historical documentation, objets trouvés from Ancient Egypt, and exhibits from Napoleon’s day. Lepère was architect and Egyptologist, who accompanied Napoleon and became the foremost architectural draughtsman on the expedition in 1798. Inspired by the high culture he encountered in such foreign parts, he dedicated himself with a passion to the world of the pharaohs. He captured their temples, sculptures and hieroglyphs on paper with a meticulousness matched only by their atmosphere. Of his hundreds of views, many were done on a large scale. As Napoleon set off in 1798 to conduct his Egyptian campaign, he was accompanied not only by soldiers but also a host of scientists and artists. Apart from strategy and politics, this “expedition” was also concerned with the exploration, documentation und evaluation of a fascinating country. The approach they took ranged from archaeology to natural history, and the findings appeared in a gigantic publication, Description de l’Égypte (Description of Egypt). The first of ten volumes appeared 200 years ago. Napoleon put together a commission of 151 scientists and Lepère became a prominent member, dealing with ancient Egyptian architecture. The obelisk on the Place de la Concorde bears his signature.

Although the Romans claimed to be conservative, it was their open mind to other cultures that seems to have empowered their ability to conquer. In this view, Roman imperialism was not only political and military in nature, but also cultural in the sense that they used conquered cultures to shape their own culture and identity. … END_OF_DOCUMENT_TOKEN_TO_BE_REPLACED

A thousand years ago, Europe as we know it today did not exist. Thirty million people living between the Ural and the British isles, between Scandinavia and Greece had no reason to think of themselves as a single culture or people. The Roman empire had left only half of the continent with roads, theaters, Latin, … END_OF_DOCUMENT_TOKEN_TO_BE_REPLACED