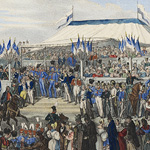 The big society event in the young Kingdom of Bavaria: The Crown Prince is getting married. To pay homage to the well-loved royal house, representatives of the citizens’ militia organize a horse race. Its huge success leads to a repeat of this event. Since 1811, the Central Agricultural Fair has been held in conjunction with the Oktoberfest, and, since 1819, the festival itself has been organized by the City of Munich. Beer and food stand owners serve refreshments to festival visitors and entertain them with music and carousels. The exhibition for the 200th Oktoberfest anniversary shows the festival’s transformation from a national Bavarian celebration with royal overtones to the world’s largest beer festival with a Bavarian image. Approximately 800 objects are on display; almost all of them were directly involved in Theresienwiese festivities at one time or another. They tell the history of the Munich Oktoberfest (also called Wiesn) in chronological order and from many different perspectives, some of them not previously known.

Although the Romans claimed to be conservative, it was their open mind to other cultures that seems to have empowered their ability to conquer. In this view, Roman imperialism was not only political and military in nature, but also cultural in the sense that they used conquered cultures to shape their own culture and identity. … END_OF_DOCUMENT_TOKEN_TO_BE_REPLACED

A thousand years ago, Europe as we know it today did not exist. Thirty million people living between the Ural and the British isles, between Scandinavia and Greece had no reason to think of themselves as a single culture or people. The Roman empire had left only half of the continent with roads, theaters, Latin, … END_OF_DOCUMENT_TOKEN_TO_BE_REPLACED