The Industrial Age and The Dreamer 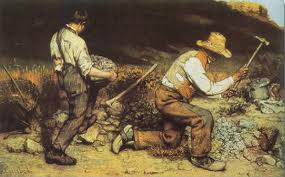 The French painter Gustave Courbet is one of the most fascinating artists of the 19th century. He is regarded both as a major pioneer of socially engaged painting and as a revolutionary of the Paris Commune (proposing to dismantle the Vendôme column). But Courbet also had an entirely other side: he was one of the greatest dreamers in history. In his portraits, landscapes, drawings and still lifes, he depicts a world of absorption, thoughtfulness and internalization – in stark contrast to the frenzied industrialization of his age. More than 80 works from all over the world will present this “other” Courbet, who from a starting point in German Romanticism realized the vision of a poetic art of the Modern, later to be further developed by Cézanne and Picasso, and in the schools of Symbolism, Surrealism and Magic Realism. Many of his works radiate a kind of somnambulistic sensualism, and are set in remote areas isolated from the outside world and where nothing is secure: one reason why so many contemporary artists continue to refer to Courbet.

Although the Romans claimed to be conservative, it was their open mind to other cultures that seems to have empowered their ability to conquer. In this view, Roman imperialism was not only political and military in nature, but also cultural in the sense that they used conquered cultures to shape their own culture and identity. … END_OF_DOCUMENT_TOKEN_TO_BE_REPLACED

A thousand years ago, Europe as we know it today did not exist. Thirty million people living between the Ural and the British isles, between Scandinavia and Greece had no reason to think of themselves as a single culture or people. The Roman empire had left only half of the continent with roads, theaters, Latin, … END_OF_DOCUMENT_TOKEN_TO_BE_REPLACED