The Death of an Archaeologist 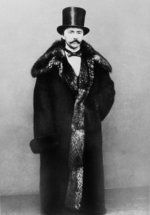 Heinrich Schliemann  died on 26 December 1890 in Naples. He was buried on 4 January 1891 in the Athen’s First Cemetery. The  exhibition, “Death in Naples – The 125th anniversary of the Death of HeinrichSchliemann” is a homage to the archaeologist, collector and patron. Selected exhibits from the Trojan Collection and from other excavations, including those at Mycenae, Tiryns and Orchomenos, are presented together for the first time. The special exhibition runs alongside the Neues Museum’s permanent exhibition of the Berlin Trojan holdings, which have been connected with the Museum für Vor- und Frühgeschichte since the “Collection of Trojan Antiquities” was gifted to the Berlin Museums in 1881. A display of a collection of Egyptian vessels, probably brought back from Egypt as souvenirs, completes this comprehensive picture of Heinrich Schliemann, excavator and collector, and his life’s work in archaeology.

Although the Romans claimed to be conservative, it was their open mind to other cultures that seems to have empowered their ability to conquer. In this view, Roman imperialism was not only political and military in nature, but also cultural in the sense that they used conquered cultures to shape their own culture and identity. … END_OF_DOCUMENT_TOKEN_TO_BE_REPLACED

A thousand years ago, Europe as we know it today did not exist. Thirty million people living between the Ural and the British isles, between Scandinavia and Greece had no reason to think of themselves as a single culture or people. The Roman empire had left only half of the continent with roads, theaters, Latin, … END_OF_DOCUMENT_TOKEN_TO_BE_REPLACED