The Book of Hours for a Lady 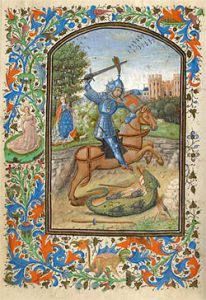 The Hours of Catherine of Cleves is the most important and lavish of all Dutch manuscripts as well as one of the most beautiful among the Morgan’s collection. Commissioned by Catherine of Cleves around 1440 and illustrated by an artist known as the Master of Catherine of Cleves, the work is an illustrated prayer book containing devotions that Catherine would recite throughout the day. The manuscript’s two volumes have been disbound for the exhibition, which features nearly a hundred miniatures. The manuscript is as rich in pictures as it is in prayers: it contains 157 (originally 168) miniatures that reveal colorful landscapes and detailed domestic interiors. Throughout the miniatures are meticulously depicted buildings, textiles, furniture, jewelry, and even fish—painted over silver foil. The exhibition also includes manuscripts illuminated by both predecessors and contemporaries of the Master of Catherine of Cleves, who is considered the finest as well as the most original illuminator of the northern Netherlands.

Although the Romans claimed to be conservative, it was their open mind to other cultures that seems to have empowered their ability to conquer. In this view, Roman imperialism was not only political and military in nature, but also cultural in the sense that they used conquered cultures to shape their own culture and identity. … END_OF_DOCUMENT_TOKEN_TO_BE_REPLACED

A thousand years ago, Europe as we know it today did not exist. Thirty million people living between the Ural and the British isles, between Scandinavia and Greece had no reason to think of themselves as a single culture or people. The Roman empire had left only half of the continent with roads, theaters, Latin, … END_OF_DOCUMENT_TOKEN_TO_BE_REPLACED