The Barbier-Mueller Collection on Show 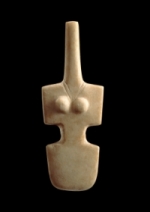 This exhibition in Genf reflects the passion of three generations of collectors of ancient art. Begun by Josef Mueller in the early twentieth century, the collection of antiquities at the Barbier-Mueller Museum was enriched by the acquisitions of his son-in-law Jean Paul Barbier-Mueller and of his grandsons. According to the recollections of Josef Mueller, in 1907 he already possessed Greek or Roman objects in his student residence in Zurich. A 1915 photograph of his sitting room at Solothurn shows a Roman stela next to a Kandinsky painting. When he moved to Paris after World War I, he owned a small set of Tanagra-type statuettes and Etruscan vases.
All these indications attest to his clear interest in the works of antiquity. He shared his taste for the artistic beauty of these creations with certain artists of his time. In 1907 Pablo Picasso had acquired an Iberian head, from which he drew inspiration in carving his “wood head” and in making preliminary sketches for the Demoiselles d’Avignon. The purity of line, the sobriety of form, and the apparent modernity of third-millennium Cycladic statuettes had already captivated artists such as Henry Moore and Max Bill, who possessed such works. Alberto Giacometti drew them. In the footsteps of these artists, Josef Mueller pursued his quest for ancient objects and rapidly assembled a rich collection of Cycladic statuettes, which would be rounded out and diversified by his son-in-law Jean Paul Barbier-Mueller, thereby becoming the largest collection in private hands.

Jean Paul Barbier-Mueller became interested in the bronzes of the Steppes and of Luristan at a very young age. Later on, the works he had collected came to augment the original core constituted by Josef Mueller. After the two collections were merged following Josef Mueller’s death, Jean Paul Barbier-Mueller endeavored to introduce coherence into the different sections of the collection and to supply what was missing from it. The pieces, chosen for their aesthetic quality, are ambassadors of civilization as varied as the Cyclades, Predynastic and Pharaonic Egypt, Greece, and Rome. They are landmarks in this representative tour of the artistic production of the ancient world. The panorama offered to visitors illustrates the major tendencies, the extraordinary diversity, and the vitality of the art of antiquity, from the sixth millennium BC to the third century AD.

Although the Romans claimed to be conservative, it was their open mind to other cultures that seems to have empowered their ability to conquer. In this view, Roman imperialism was not only political and military in nature, but also cultural in the sense that they used conquered cultures to shape their own culture and identity. … END_OF_DOCUMENT_TOKEN_TO_BE_REPLACED

The recently poisoned Russian dissident accuses the former German Bundeskanzler Herr Schröder (die Neue Zurcher Zeitung 7.10.2020) of corruption during and after his political career. He supported the Russian (business) expansion from the very beginning of his chancellorship and is on the payroll of his Russian master ever since.  He explicitly states that Herr Schröder … END_OF_DOCUMENT_TOKEN_TO_BE_REPLACED