The Artistic Aftermath of the First World War 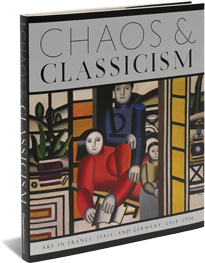 Following the chaos of World War I, a move emerged towards figuration, clean lines, and modeled form, and away from the two-dimensional abstracted spaces, fragmented compositions, and splintered bodies of the avant-gardes—particularly Cubism, Futurism and Expressionism, that dominated the opening years of the 20th century. After the horrors of the First World War, a desire reasserted itself to represent the body whole and intact. Classicism, “return to order,” synthesis, organization, and enduring values, rather than the pre-War emphasis on innovation-at-all-costs, would dominate the discourse of contemporary art. The exhibition in the Guggenheim museum in New York traces this interwar classical aesthetic as it worked its way from a poetic, mythic idea in the Parisian avant-garde; to a political, historical idea of a revived Roman Empire, under Mussolini; to a neo-Platonic High Modernism at the Bauhaus in Germany and beyond, and then, chillingly, a pseudo-biological classicism in Nazi culture. Interwoven through these closely related but distinct classical paradigms will be the key movements that proclaimed visual and thematic “clarity”: Purism, Novecento, and Neue Sachlichkeit. This vast transformation of contemporary aesthetics in France, Italy, and Germany will encompass painting, sculpture, photography, architecture, film, fashion, and the decorative arts.

Although the Romans claimed to be conservative, it was their open mind to other cultures that seems to have empowered their ability to conquer. In this view, Roman imperialism was not only political and military in nature, but also cultural in the sense that they used conquered cultures to shape their own culture and identity. … END_OF_DOCUMENT_TOKEN_TO_BE_REPLACED

A thousand years ago, Europe as we know it today did not exist. Thirty million people living between the Ural and the British isles, between Scandinavia and Greece had no reason to think of themselves as a single culture or people. The Roman empire had left only half of the continent with roads, theaters, Latin, … END_OF_DOCUMENT_TOKEN_TO_BE_REPLACED