German Portraiture out of the Shadow 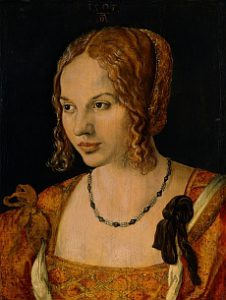 Around 1300, artistic developments occurred in Italy which led to a new understanding of painting. An enjoyment of narration, decorative details and the discovery of space and landscape led to a departure from In collaboration with the Kunsthistorisches Museum in Vienna, the Kunsthalle of the Hypo Cultural Foundation in Munich presents an exhibition on German portraiture around 1500. Around 170 outstanding artworks, including paintings by Albrecht Dürer (1471-1528), Lucas Cranach the Elder (1472-1553) and Hans Holbein the Younger (1497/98-1543), as well as formidable sculptures, medals, prints and drawings, demonstrate how individuals became the focal point of artistic interest in the late fifteenth and early sixteenth centuries and how artists developed into explorers and inventors of humankind. The exhibition explores the artist’s view of man during the transition of the Late Middle Ages to the Early Modern Era in the German-speaking world. The show deals not only with early examinations of the individual in the fifteenth century but also with a whole range of likenesses of people in the dawning Renaissance. Furthermore, the selected portraits provide insight into Late Medieval and Early Modern society, as they confront us with people rendered explicitly in their social function. This show presents outstanding works by the greatest artists of their time, demonstrating the contemporary artistic notion of the various genera dicendi of art, in other words, the three basic rhetoric principles: the sublime and distinguished, as personified by Dürer; the simple and unadorned, espoused by Cranach; and finally Holbein’s hitherto unattained interpretation of rendering reality, space and body in such a lifelike manner that they appear tangible – in short, three mutually enriching concepts that to this day have influenced our view of early German art.

Although the Romans claimed to be conservative, it was their open mind to other cultures that seems to have empowered their ability to conquer. In this view, Roman imperialism was not only political and military in nature, but also cultural in the sense that they used conquered cultures to shape their own culture and identity. … END_OF_DOCUMENT_TOKEN_TO_BE_REPLACED

The recently poisoned Russian dissident accuses the former German Bundeskanzler Herr Schröder (die Neue Zurcher Zeitung 7.10.2020) of corruption during and after his political career. He supported the Russian (business) expansion from the very beginning of his chancellorship and is on the payroll of his Russian master ever since.  He explicitly states that Herr Schröder … END_OF_DOCUMENT_TOKEN_TO_BE_REPLACED