From the Trenches to The ‘Neue Sachlichkeit’ 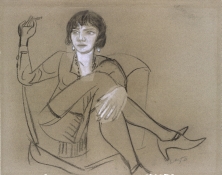 Verism and the New Objectivity were defining art styles for the Weimar Republic. The Kupferstichkabinett in Berlin exhibits works from Radziwill, Christian Schad, Rudolf Schlichter, Georg Schrimpf, Eugen Hoffmann and others, who used their art as a response to the traumatic experience of the First World War and the utopias of Expressionism that were shattered along with it. Die Neue Sachlichkeit or ‘New Objectivity’ was born. In contrast to the Expressionists, their works were conspicuous for both their sharper eye for reality, with all the social destitution this entailed in the years after the war and revolution, as well as the motifs of the modern industrialised world. One stylistic hallmark they all share is the graphic quality of the figurative detail, with a dominance of the line, used with documentary precision to capture real images in a relatively detached way. After the excess emotionalism of Expressionism, the new motto of the day was ‘Feelings are a private concern’. While the Verists among this group of artists (including such figures as Grosz, Dix, Hubbuch, Schlichter) took to task social discrepancies between those who had profited and those who had lost out from the war, the glamour of the nouveau riche and the misery of the working classes, a second, more classically-orientated contingent (Kanoldt, Mense, Schrimpf) gave voice in enraptured landscape and figure paintings to their yearning for a quiet, timeleNew Objectivityss way of life. The war experiences and the uncertain (political) fate of the Weimar Republic inspired many artists and Verism and the New Objectivity were prominently present.

Although the Romans claimed to be conservative, it was their open mind to other cultures that seems to have empowered their ability to conquer. In this view, Roman imperialism was not only political and military in nature, but also cultural in the sense that they used conquered cultures to shape their own culture and identity. … END_OF_DOCUMENT_TOKEN_TO_BE_REPLACED

The recently poisoned Russian dissident accuses the former German Bundeskanzler Herr Schröder (die Neue Zurcher Zeitung 7.10.2020) of corruption during and after his political career. He supported the Russian (business) expansion from the very beginning of his chancellorship and is on the payroll of his Russian master ever since.  He explicitly states that Herr Schröder … END_OF_DOCUMENT_TOKEN_TO_BE_REPLACED